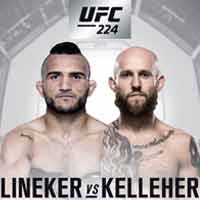 Review by AllTheBestFights.com: 2018-05-12, pretty good finish between John Lineker and Brian Kelleher but it is not enough to get three stars: it gets two.

John Lineker entered this fight with a professional record of 30-8-0 (57% finishing rate) and he is ranked as the No.7 bantamweight in the world. He lost to current #1 TJ Dillashaw in 2016 (Dillashaw vs Lineker) but he came back to win in 2017 with Marlon Vera (John Lineker vs Marlon Vera).
His opponent, Brian Kelleher, has a mma record of 19-8-0 (79% finishing rate) and he entered as the No.12 in the same weight class. He was defeated by Marlon Vera last year but then he has beat Damian Stasiak and Renan Barao (Brian Kelleher vs Renan Barao Pegado). Lineker vs Kelleher is on the undercard of Amanda Nunes vs Raquel Pennington – UFC 224. Watch the video and rate this fight!

(Free embeddable video hosted on Youtube and not uploaded by AllTheBestFights)
https://www.youtube.com/watch?v=WmRqXP41iOs