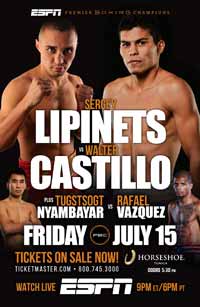 Review by AllTheBestFights.com: 2016-07-15, some good exchanges in the second part of the fight but it is not enough to get three stars: Sergey Lipinets vs Walter Castillo gets two.

The undefeated Sergey Lipinets entered this fight with a perfect boxing record of 9-0-0 (7 KOs=78%) and he is ranked as the No.24 super lightweight in the world. He has already fought once in 2016 winning over Levan Ghvamichava (=Lipinets vs Ghvamichava).
His opponent, Walter Castillo, has an official record of 26-3-1 (19 knockouts) and he entered as the No.23 in the same weight class. He fought three times last year losing to Amir Imam (=Imam vs Castillo), beating Ammeth Diaz and drawing with Keita Obara (=Obara vs Castillo). Lipinets vs Castillo is the main event of the evening. Watch the video and rate this fight!

the fight Lipinets vs Castillo starts at 55:00