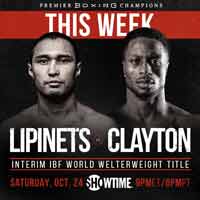 Review by AllTheBestFights.com: 2020-10-24, fight not so exciting between Sergey Lipinets and Custio Clayton: it gets two stars.
The former Ibf light-Ww champ Sergey Lipinets entered this fight with a professional boxing record of 16-1-0 (12 KOs=75%) and he is ranked as the No.14 welterweight in the world. He suffered his only loss when he faced Mikey Garcia in 2018 (Mikey Garcia vs Sergey Lipinets), after this bout he has defeated Erick Bone, Lamont Peterson (Lamont Peterson vs Sergey Lipinets) and Jayar Inson.
His opponent, the undefeated former Olympian Custio Clayton, has a perfect record of 18-0-0 (12 knockouts) and he entered as the No.27 in the same weight class. In his last three bouts he has won over DeMarcus Corley, Johan Perez and Diego Ramirez. Clayton vs Lipinets is valid for the interim IBF World welterweight title. Watch the video and rate this fight!

« Khabib Nurmagomedov vs Justin Gaethje full fight Video UFC 254 – 2020
2020 BOXING fight – Claudio Marrero vs Xavier Martinez – full fight Video »
HELP US!!! Since the CORONAVIRUS pandemic started, AllTheBestFights.com has struggled to survive! If you have enjoyed this website for the past 10 years, today we ask you for a little help: