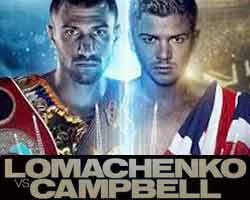 Review by AllTheBestFights.com: 2019-08-31, very technical fight but not so exciting: Vasyl Lomachenko vs Luke Campbell gets two stars.

The 2012 and 2008 Olympic gold medalist and world champion in three different weight classes Vasyl Lomachenko entered this fight with a boxing record of 13-1-0 (10 KOs=77%) and he is ranked as the No.1 lightweight in the world. He lost to Orlando Salido at his second professional bout in 2014 (controversial split decision, Salido vs Lomachenko), but since then he has won twelve consecutive fights beating Jose Pedraza (Vasyl Lomachenko vs Jose Pedraza) and Anthony Crolla in his last two (Vasyl Lomachenko vs Anthony Crolla).
His opponent, tThe 2012 Olympic bantamweight gold medalist Luke Campbell, has an official record of 20-2-0 (16 KOs=80%) and he entered as the No.5 in the same weight class. He lost to Jorge Linares in 2017 (via split decision, Jorge Linares vs Luke Campbell), but then he has won over Troy James, Yvan Mendy (Luke Campbell vs Yvan Mendy 2) and Adrian Yung (Luke Campbell vs Adrian Young). Lomachenko vs Campbell is valid for the WBA, WBO and vacant WBC World lightweight titles. Watch the video and rate this fight!