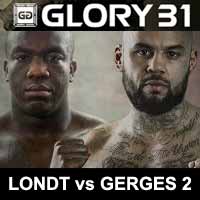 Review by AllTheBestFights.com: 2016-06-25, pretty good fight between Ismael Londt and Hesdy Gerges: it gets three stars.

The former SuperKombat Hw champion Ismael Londt entered this fight with a pro kickboxing record of 40-7-1 (18 knockouts) and he is ranked as the No.3 heavyweight in the world. He lost to Badr Hari in 2015 (=Hari vs Londt) but he came back to win in 2016 defeating Anderson ‘Braddock’ Silva (=Silva vs Londt) and Jahfarr Wilnis (=Londt vs Wilnis).
His opponent, Hesdy Gerges, has a record of 49-15-1 (23 knockouts) and he entered as the No.7 in the same weight class. He also suffered one defeat in 2015, against Jahfarr Wilnis, but he has beat Grégory Tony in 2016. In their first fight Londt defeated Gerges by tko (March 15, 2013 Londt vs Gerges I); this second bout is on the undercard of Robin van Roosmalen vs Sitthichai Sitsongpeenong 2 – Glory 31. Watch the video and rate this fight!