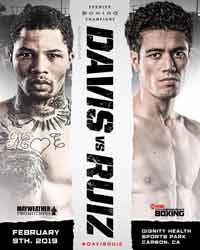 Review by AllTheBestFights.com: 2019-02-09, one sided fight between Erickson Lubin and Ishe Smith: it gets two stars.

Erickson Lubin entered this fight with a professional record of 19-1-0 (14 knockouts) and he is ranked as the No.16 super welterweight in the world. He lost to Jermell Charlo in 2017 (Jermell Charlo vs Erickson Lubin) but he came back to win against Silverio Ortiz in 2018.
His opponent, the former Ibf light-Mw champion Ishe Smith, has a boxing record of 29-10-0 (12 knockouts) and he entered as the No.33 in the same weight class but he comes off two consecutive losses, with Julian Williams (Julian Williams vs Ishe Smith) and Tony Harrison (Tony Harrison vs Ishe Smith); his last victory was against Frank Galarza in 2016 (Ishe Smith vs Frank Galarza). Lubin vs Smith is on the undercard of Gervonta Davis vs Hugo Ruiz. Watch the video and rate this fight!