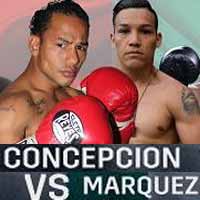 Review by AllTheBestFights.com: 2015-12-17, fight not particularly good between Luis Concepcion and Hernan Marquez: it gets two stars.

The former Wba Flw champion Luis Concepcion entered this fight with a professional boxing record of 33-4-0 (24 knockouts) and he is ranked as the No.6 super flyweight in the world (currently the #1 in this division is Naoya Inoue). He has fought twice in 2015 losing to Carlos Cuadras (=Cuadras vs Concepcion) but then he has won over David Sanchez (=Sanchez vs Concepcion).
His opponent, Hernan Marquez (former Wba flyweight champion as well), has an official record of 39-6-1 (28 knockouts) and he entered as the No.42 bantamweight. ‘Tyson’ Marquez has fought three times in 2015 beating Roberto Lopez and Jose Alfredo Tirado but then he lost to Juan Francisco Estrada (=Estrada vs Marquez). In their previous fights Marquez defeated Concepcion by tko in both bouts (Marquez vs Concepcion I and Marquez vs Concepcion II). ‘El Nica’ Concepcion vs Marquez 3 is valid for the interim WBA World super flyweight title. Watch the video and rate this fight!