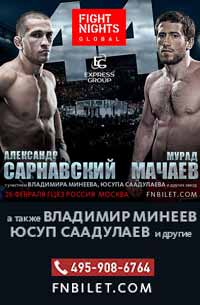 Review by AllTheBestFights.com: 2016-02-26, good start but the rest of the fight was pretty boring: Alexander Sarnavskiy vs Murad Machaev gets two stars.

Alexander Sarnavskiy entered this fight with a professional mma record of 32-3-0 (81% finishing rate) and he is ranked as the No.24 lightweight in the world. He fought three times last year losing to Marcin Held (=Held vs Sarnavskiy) but then he won over Jesse Ronson and Leandro Rodrigues Pontes.
His opponent, Murad Machaev, has an official record of 18-1-0 (76% finishing rate) and he entered as the No.36 featherweight. He suffered his only defeat when he faced Marcin Held in 2012 (=Held vs Machaev), but since then he has collected nine consecutive victories. Sarnavskiy vs Machaev is the main event of the Fight Nights Global 44. Watch the video and rate this fight!