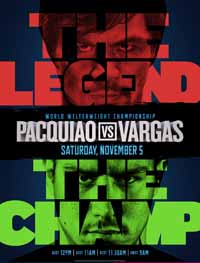 Review by AllTheBestFights.com: 2016-11-05, disappointing fight between Nonito Donaire and Jessie Magdaleno: it gets two stars.

The Wbo super-Bw champion (and former world champion in four different weight classes) Nonito Donaire entered this fight with a pro record of 37-3-0 (24 knockouts) and he is ranked as the No.2 super bantamweight in the world (currently the #1 in this division is Scott Quigg). He lost to Nicholas Walters in 2014 (=Donaire vs Walters) but then he has won four consecutive fights beating Cesar Juarez (4-stars fight, Donaire vs Juarez) and Zsolt Bedak in his last two (=Donaire vs Bedak).
His opponent, the undefeated Jessie Magdaleno, has a perfect boxing record of 23-0-0 (17 knockouts) and he entered as the No.42 featherweight. He has fought once in 2016 winning over Rey Perez. Donaire vs Magdaleno is valid for the WBO World super bantamweight title (Donaire’s second defense); undercard of Manny Pacquiao vs Jessie Vargas. Watch the video and rate this fight!