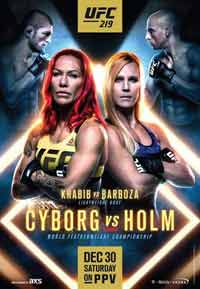 Review by AllTheBestFights.com: 2017-12-30, fight not particularly exciting between Carlos Condit and Neil Magny: it gets three stars.

The black belt in gaidojutsu and former interim Ufc Ww champion Carlos Condit entered this fight with a pro record of 30-10-0 (93% finishing rate) but he is not ranked as he hasn’t fought since August 27, 2016 when he was defeated by Demian Maia (=Maia vs Condit); before this bout he had also lost to Robbie Lawler (via split decision, 4-stars fight Lawler vs Condit).
His opponent, Neil Magny, has an official mma record of 19-6-0 (47% finishing rate) and he entered as the No.13 welterweight in the world but he lost two out of his last three fights, against Lorenz Larkin (=Magny vs Larkin) and with Rafael dos Anjos (=dos Anjos vs Magny); between these two bouts he beat Johny Hendricks (=Hendricks vs Magny). Magny vs Condit is on the undercard of Cris Cyborg Justino vs Holly Holm – UFC 219. Watch the video and rate this fight!