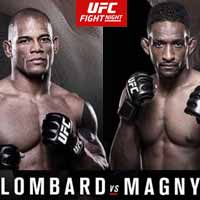 Review by AllTheBestFights.com: 2016-03-20, nice back and forth fight between Neil Magny and Hector Lombard: it gets three stars (UFC Performance of the Night).

The black belt in Bjj, judo and former Bellator Mw champion Hector Lombard entered this fight with a pro mma record of 34-4-1 (77% finishing rate) and he is ranked as the No.11 welterweight in the world. He suffered his last loss when he faced Yushin Okami in 2013 (via split decision, Lombard vs Okami), after this bout he has collected three consecutive victories, the last one against Josh Burkman (then the result was overturned in a no-contest because the Cuban tested positive for anabolic steroids, Lombard vs Burkman).
His opponent, Neil Magny, has a record of 17-4-0 (47% finishing rate) and he entered as the No.13 in the same weight class. He fought five times last year losing his third bout, against Demian Maia; then he beat Erick Silva (=Silva vs Magny) and Kelvin Gastelum (=Magny vs Gastelum). Lombard vs Magny is on the undercard of Mark Hunt vs Frank Mir – UFC Fight Night 85. Watch the video and rate this fight!