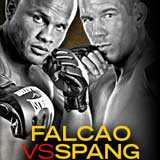 Review: 2012-05-18, pretty fight with a nice first round: Maiquel Falcao vs Andreas Spang gets three stars (fight ended by unanimous decision). Maiquel Jose Falcao Goncalves (30-4-0) entered as the No.37 middleweight in the world while Andreas Spang (8-1-0) entered as the No.60. Falcao vs Spang is the final of the Bellator Middleweight Tournament; main event of Bellator 69. Watch the video!