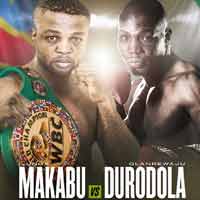 Review by AllTheBestFights.com: 2020-12-19, nice and tough fight between Ilunga Makabu and Olanrewaju Durodola: it is close to get four stars (take a look at our ranking of the best boxing fights of 2020).
The Wbc Cw champion Ilunga Makabu entered this fight with a pro record of 27-2-0 (24 KOs=89%) and he is ranked as the No.2 cruiserweight in the world (currently the #1 in this division is Mairis Briedis). He was defeated by Tony Bellew in 2016 (Tony Bellew vs Ilunga Makabu) but since then he has won eight consecutive bouts defeating Dmitry Kudryashov (Dmitry Kudryashov vs Ilunga Makabu), Aleksei Papin (Ilunga Makabu vs Aleksei Papin) and Michal Cieslak in his last three (Ilunga Makabu vs Michal Cieslak).
His opponent, the former Olympian Olanrewaju Durodola, has an official boxing record of 34-7-0 (31 KOs=91%) and he entered as the No.25 in the same weight class. He lost to Michal Cieslak last year (Michal Cieslak vs Olanrewaju Durodola) but then he has won five bouts beating Abraham Tabul and Olarewaju Segun in 2020. Durodola vs Makabu is valid for the WBC World cruiserweight title (Makabu’s first defense). Watch the video and rate this fight!

Where: Kinshasa, Democratic Republic Of The Congo