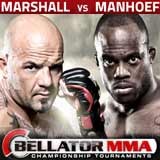 Review: 2014-09-19, nice exchanges between Melvin Manhoef and Doug Marshall: it gets three stars. Melvin Manhoef entered this fight with a pro mma record of 28-11-1 (93% ko/tko victory rate – he has never won via submission) and he is ranked as the No.56 welterweight in the world, he suffered two consecutive defeats in 2013, against Brock Larson (=Manhoef vs Larson) and Mamed Khalidov (=Khalidov vs Manhoef), but he came back to win in 2014 beating Evangelista ‘Cyborg’ Santos in their rematch (=Manhoef vs Cyborg 2).
His opponent, Doug Marshall, has a record of 18-7-0 (89% finishing rate) and he entered as the No.41 middleweight, he won the Bellator Mw tournament (season 8) last year defeating Brett Cooper in the final (=Cooper vs Marshall) but then he was beat by Alexander Shlemenko in a fight valid for the Bellator Mw title (=Shlemenko vs Marshall). Manhoef vs Marshall is the main event of Bellator 125. Watch the video and rate this fight!