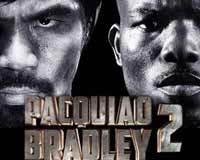 Review: 2014-04-12, good fight between Manny Pacquiao and Timothy Bradley: this second fight gets three stars. Manny Pacquiao entered this fight with a professional boxing record of 55-5-2 (38 knockouts) and he is ranked as the No.4 welterweight in the world, he has won world titles in seven different weight classes but in 2012 he lost his last world belt against Bradley (very controversial decision, Bradley vs Pacquiao I). After that bout ‘Pac Man’ was also defeated by Juan Manuel Marquez during their fourth fight (five-stars fight Pacquiao vs Marquez 4) but last hear he came back to win against Brandon Rios, his only bout of 2013 (Pacquiao vs Rios).
His opponent, the undefeated Timothy Bradley, has a perfect record of 31-0-0 (12 knockouts) and he entered as the No.2 in the same weight class but the verdicts of his last three bouts were very controversial: against Pacquiao, Ruslan Provodnikov (fight of the year candidate: Bradley vs Provodnikov) and Juan Manuel Marquez (=Bradley vs Marquez). Currently the #1 in this division is Floyd Mayweather Jr). Pacquiao vs Bradley 2 is valid for the WBO welterweight title (Bradley’s third defense). Watch the video and rate this fight!