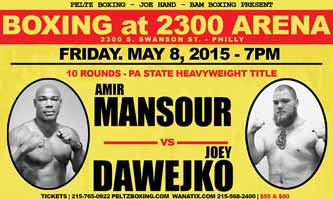 Review by AllTheBestFights.com: 2015-05-08, fight not particularly exciting between Amir Mansour and Joey Dawejko: it gets two stars.

The 42-year-old Amir Mansour (18 years older than Dawejko) entered this fight with a professional boxing record of 21-1-0 (16 KOs=76%) and he is ranked as the No.27 heavyweight in the world. He fought twice last year losing to Steve Cunningham (one of the best boxing fights of 2014, Mansour vs Cunningham) but then he came back to win beating Fred Kassi (=Mansour vs Kassi).
His opponent, Joey Dawejko, has an official record of 14-3-2 (7 knockouts) and he entered as the No.47 in the same weight class. He suffered his last loss in 2013, against Charles Martin, but since then he has won six consecutive fights defeating Enobong Umohette in his last bout. Mansour vs Dawejko is valid for the vacant USA Pennsylvania State heavyweight title. Watch the video and rate this fight!