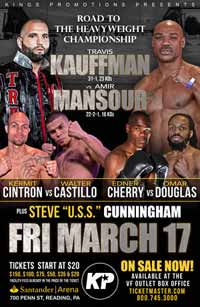 Review by AllTheBestFights.com: 2017-03-17, disappointing fight between Travis Kauffman and Amir Mansour: it gets two stars.

Travis Kauffman entered this fight with a pro boxing record of 31-1-0 (23 knockouts) and he is ranked as the No.52 heavyweight in the world. He suffered his last loss when he faced Tony Grano in 2009, since then he has collected 13 wins and one No-Decision when he faced Chris Arreola in 2015 (Arreola’s majority decision victory was overturned to no-decision since he failed the post fight drug test, Arreola vs Kauffman); after this bout Kauffman beat Josh Gormley).
His opponent, Amir Mansour, has a record of 22-2-1 (16 knockouts) but he is not ranked as he hasn’t fought since January 23, 2016 when he was defeated by Dominic Breazeale (=Mansour vs Breazeale). Amir Mansour vs Travis Kauffman is valid for the vacant USBA and WBC (USNBC) heavyweight titles. Watch the video and rate this fight!