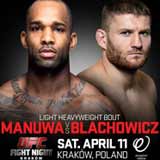 Review by AllTheBestFights.com: 2015-04-11, some good single shots between Jan Blachowicz and Jimi Manuwa but it is not enough to get three stars: it gets two.

The former KSW light-Hw champion Jan Blachowicz entered this fight with a pro mma record of 18-3-0 (67% finishing rate) and he is ranked as the No.17 light heavyweight in the world. He suffered his last defeat in 2011 when he faced Rameau Sokoudjou, since then he has won six consecutive bouts taking revenge on Sokoudjou (=Blachowicz vs Sokoudjou 2) and beating Ilir Latifi in his last fight (at his Ufc debut, Latifi vs Blachowicz).
His opponent, Jimi Manuwa, has a record of 14-1-0 (100% finishing rate) and he entered as the No.18 in the same weight class but he comes off his first and only loss, against Alexander Gustafsson (=Gustafsson vs Manuwa). Blachowicz vs Manuwa is on the undercard of Gabriel Gonzaga vs Mirko ‘Cro Cop’ Filipovic 2 – UFC Fight Night 64. Watch the video and rate this fight!