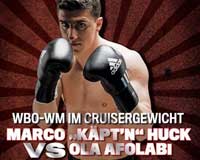 Review: 2012-05-05, tough and balanced fight between Marco Huck and Ola Afolabi: three stars (fight ended by majority decision). Marco Huck (34-2-0) entered as the No.4 cruiserweight in the world while Ola Afolabi (19-2-3) entered as the No.7. Huck vs Afolabi 2 is valid for the WBO cruiserweight title; in their first fight Huck defeated Afolabi by unanimous decision (December 5, 2009). Watch the video!