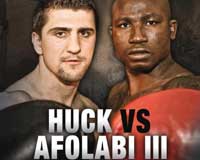 Review: 2013-06-08, pretty good and tough fight between Marco Huck and Ola Afolabi: this third fight gets three stars. Marco Huck ranked as the No.3 cruiserweight in the world, entered the fight with a record of 35-2-1 (25 knockouts) while Ola Afolabi had a record of 19-2-4 (Afolabi is not ranked as he hasn’t fought since May 5, 2012 when he faced for the second time Huck ending in a draw while in their first fight the German defeated the Englishman by a close decision – December 5, 2009). Huck vs Afolabi 3 is valid for the WBO cruiserweight title; they also faced each other a fourth time on February 27, 2016 (=Afolabi vs Huck 4). Watch the video!