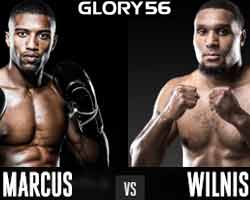 The former Glory Mw and Wbc light-Hw champion Simon Marcus entered this fight with a pro kickboxing record of 48-4-2 (27 knockouts) and he is ranked as the No.2 cruiserweight in the world. He lost to Alex Pereira last year (Simon Marcus vs Alex Pereira) but he came back to win in 2018 with Zack Wells (Simon Marcus vs Zack Wells).
His opponent, Jason Wilnis, has a record of 30-8-1 (8 knockouts) and he entered as the No.4 in the same weight class but he comes off two consecutive losses, against Simon Marcus in their third fight (Wilnis vs Marcus III) and with Yousri Belgaroui (Jason Wilnis vs Yousri Belgaroui). In their first bout Marcus had defeated Wilnis (Simon Marcus vs Jason Wilnis I) while in their second fight Jason took revenge on him (4-stars bout, Simon Marcus vs Jason Wilnis II); this fourth fight is on the undercard of Artem Vakhitov vs Danyo Ilunga 2 – Glory 56. Watch the video and rate this fight!

(Free embeddable video hosted on Youtube and not uploaded by AllTheBestFights)
https://www.youtube.com/watch?v=aBy79qG7C4c