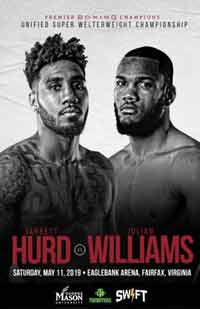 Review by AllTheBestFights.com: 2019-05-11, some good exchanges between Alexandru Marin and Luis Concepcion but it is not enough to get three stars: it gets two.

The undefeated Alexandru Marin entered this fight with a perfect record of 17-0-0 (11 knockouts) and he is ranked as the No.33 super flyweight in the world. In his last three fights he has won over Juan Gabriel Medina, Michael Ruiz Jr and Bruno Escalante.
His opponent, the former world champion in two different weight classes Luis Concepcion, has a boxing record of 37-7-0 (26 knockouts) and he entered as the No.22 in the same weight class but he lost two out of his last three fights, against Iran Diaz (Luis Concepcion vs Iran Diaz) and Andrew Moloney (Andrew Moloney vs Luis Concepcion); between these two bouts he beat Luis Carrillo. Marin vs Concepcion is valid for the IBO Inter-Continental super flyweight title; undercard of Jarrett Hurd vs Julian Williams. Watch the video and rate this fight!