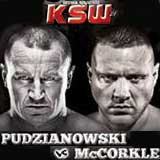 Review: 2013-09-28, something good in the second part of the fight but it is not enough to get three stars. Mariusz Pudzianowski, five time World’s Strongest Man, entered the fight with a record of 5-3-0 (80% finishing rate) while Sean McCorkle had a record of 17-5-0 (95% finishing rate). In their first fight McCorkle defeated Pudzian by submission (June 8, 2013); this second fight is the main event “KSW 24: The Clash of the Giants”. Watch the video!

Event: KSW 24: The Clash of the Giants

Video: We are sorry, but since we have been contacted by “Cyfrowy Polsat SA”, we have removed the video of the fight “Pudzianowski vs McCorkle 2” that was hosted on www.mentv.pl. If you have seen the full fight video you can rate it. THANKS!