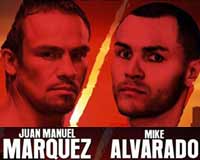 Review: 2014-05-17, some good exchanges in the second part of the fight but it is not enough to get three stars: Juan Manuel Marquez vs Mike Alvarado gets two. Juan Manuel Marquez entered this fight with a professional boxing record of 55-7-1 (40 knockouts) and he is ranked as the No.3 welterweight in the world, he is 40 years old (seven years older than Alvarado) and he has won world titles in four different weight classes; ‘Dinamita’ Marquez fought just once in 2013 losing to then-undefeated Timothy Bradley (via split decision, Bradley vs Marquez).
His opponent, Mike Alvarado, has an official record of 34-2-0 (23 knockouts) and he entered as the No.14 light welterweight, he fought twice in 2013 defeating Brandon Rios in their second bout (4 stars-fight Rios vs Alvarado 2) but then he was defeated by Ruslan Provodnikov losing the WBO light-Ww belt (4 stars-fight Alvarado vs Provodnikov). Marquez vs Alvarado is valid for the vacant WBO International welterweight title. Watch the video and rate this fight!