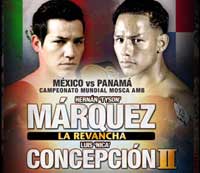 Review: 2011-10-29, nice fight with three knockdowns in the first and unique round of the rematch between Hernan Marquez and Luis Concepcion. The Panamian boxer, “El Nica” Concepcion, starts strong but at the first combination of Hernan “Tyson” Marquez he goes down and the fight ends shortly after (at the third knockdown). Hernan Marquez (31-2-0) entered as the No.4 flyweight in the world while Luis Concepcion (23-2-0) entered as the No.9. Marquez vs Concepcion 2 was valid for the WBA World flyweight title (in the first fight Marquez defeated Concepcion by TKO in the eleventh round, one of the best boxing fights of 2011). Watch the video!