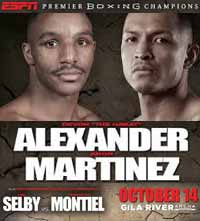 Review by AllTheBestFights.com: 2015-10-14, fight not particularly exciting between Devon Alexander and Aaron Martinez: it gets two stars.

The former world champion in two different weight classes Devon Alexander entered this fight with a pro boxing record of 26-3-0 (14 knockouts) and he is ranked as the No.10 welterweight in the world (currently the #1 in this division is Manny Pacquiao) but he lost two out of his three last fights: against Shawn Porter (=Alexander vs Porter) and Amir Khan (=Khan vs Alexander). Between the two losses he beat Jesus Soto Karass (=Alexander vs Soto Karass).
His opponent, Aaron Martinez, has an record of 19-4-1 (4 knockouts) and he entered as the No.78 in the same weight class and he comes off two consecutive defeats: he lost to Josesito Lopez (=Lopez vs Martinez) and Robert Guerrero (=Guerrero vs Martinez). Alexander vs Martinez is the main event of the evening. Watch the video and rate this fight!