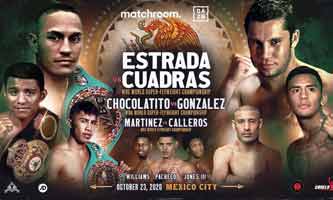 Review by AllTheBestFights.com: 2020-10-23, one sided fight between Julio Cesar Martinez and Moises Calleros: it gets two stars.
The Wbc Flw champion Julio Cesar Martinez Aguilar entered this fight with a record of 16-1-0 (12 KOs=75%) and he is ranked as the No.2 flyweight in the world (currently the #1 in this division is Kosei Tanaka). He suffered his only loss at his pro boxing debut against Joaquin Cruz in 2015 (via split decision), since then he has collected 16 victories and one no-contest taking revenge on Cruz in 2016 and beating Cristofer Rosales (Julio Cesar Martinez Aguilar vs Cristofer Rosales) and Jay Harris in his last two (Julio Cesar Martinez Aguilar vs Jay Harris).
His opponent, Moises Calleros, has a boxing record of 33-9-1 (17 knockouts) and he entered as the No.22 light-flyweight. He lost two consecutive fights in 2018, against Ryuya Yamanaka (Ryuya Yamanaka vs Moises Calleros) and Jose Argumedo (Jose Argumedo vs Moises Calleros), but since then he has won five bouts beating Javier Romano in 2020. Calleros vs Martinez is valid for the WBC World flyweight title (Martinez’s second defense); undercard of Juan Francisco Estrada vs Carlos Cuadras 2. Watch the video and rate this fight!