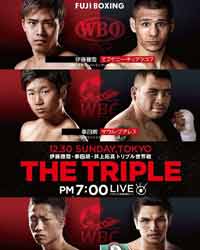 Review by AllTheBestFights.com: 2018-12-30, disappointing fight between Masayuki Ito and Evgeny Chuprakov: it gets two stars.

The Wbo super-Fw champion Masayuki Ito entered this fight with a boxing record of 24-1-1 (12 knockouts) and he is ranked as the No.11 super featherweight in the world. He suffered his only loss when he faced Rikki Naito in 2015, since then he has won eight consecutive bouts beating Vergil Puton and Christopher Diaz in 2018 (Masayuki Ito vs Christopher Diaz).
His opponent, the undefeated Evgeny Chuprakov, has a perfect record of 20-0-0 (10 knockouts) and he entered as the No.23 in the same weight class. Between 2017 and 2018 he has fought three times beating Eden Sonsona, Pablo Manuel Ojeda and Ernie Sanchez. Ito vs Chuprakov is valid for the WBO World super featherweight title (Ito’s first defense). Watch the video and rate this fight!