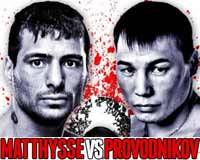 Review by AllTheBestFights.com: 2015-04-18, great battle with some very tough exchanges: Lucas Matthysse vs Ruslan Provodnikov is very close to get four stars (look at the comments if you want to see how we rate it round by round).

The former interim Wbc champion Lucas Martin Matthysse entered this fight with a professional boxing record of 36-3-0 (34 KOs=94%) and he is ranked as the No.3 super lightweight in the world (currently the #1 in this division is Terence Crawford). He suffered his last defeat in 2013 when he faced Danny Garcia (=Garcia vs Matthysse), since then he has fought twice beating John Molina Jr (The Ring magazine Fight of the Year 2014, Matthysse vs Molina) and Roberto Ortiz (=Matthysse vs Ortiz).
His opponent, Ruslan Provodnikov, has an official record of 24-3-0 (17 knockouts) and he entered as the No.8 in the same weight class. He won the Wbo world belt in 2013 against Mike Alvarado (one of the best boxing fights of the year, Alvarado vs Provodnikov) but then he lost it at his first defense, against Chris Algieri (=Provodnikov vs Algieri); after this bout he came back to win beating Jose Luis Castillo (=Provodnikov vs Castillo). Matthysse vs Provodnikov is the main event of the evening. Watch the video and rate this fight!