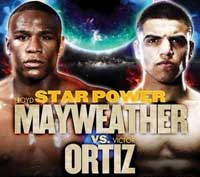 Review: 2011-09-17, 2011-09-17, after three tactical rounds in the fourth Floyd Mayweather Jr and Victor Ortiz start the action…When Ortiz was forcing Mayweather against the ropes he also headbutts Floyd, Ortiz immediately apologizes but the referee deducted one point to him. But when the fight restarts and the two boxers were embracing Floyd Mayweather Jr strikes Victor Ortiz and knocks him out! At that moment Joe Cortez was not looking the two fighters and “Mayweather vs Ortiz” ends with the victory of “Pretty Boy” by KO winning also the WBC welterweight title. This is not the action that we like and this is not the “Sweet Science” of boxing: 2 stars. Victor Ortiz (29-2-2) entered as the No.3 welterweight in the world while Floyd Mayweather Jr (41-0-0) was not ranked before this fight (as he did not fight since May 5, 2010 against Shane Mosley). Watch the video!