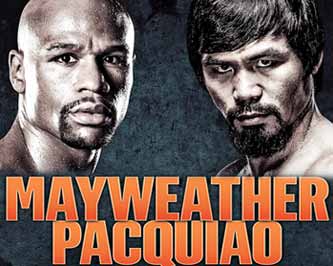 Review by AllTheBestFights.com: 2015-05-02, we expected a war, an exciting and unforgettable bout between two of the best fighters in boxing history, but unfortunately Floyd Mayweather vs Manny Pacquiao left something to be desired. That said, we think that the ‘fight of the century’ is still worth watching and it gets three stars but if you want to see some epic fights it’s better to check our ranking of the best boxing fights of the year 2015 or the Users’ boxing ranking.

The undefeated 38-year-old Floyd Mayweather Jr (two years older than Pacquiao) entered this fight with a perfect boxing record of 47-0-0 (26 knockouts) and he is ranked as the No.1 welterweight and No.1 pound for pound in the world. In his last three fights ‘Money’ Mayweather beat Saul ‘Canelo’ Alvarez in 2013 (=Mayweather vs Alvarez) and twice Marcos Maidana in 2014: the first bout was very close, Floyd won just by majority decision (=Mayweather vs Maidana I) while he beat the Argentinian via unanimous decision in their rematch (=Mayweather vs Maidana II).
His opponent, the world champion in eight different weight division Manny Pacquiao (Mayweather has won world titles in five different weight classes) has an official record of 57-5-2 (38 knockouts) and he entered as the No.2 welterweight and No.3 P4P. He suffered two consecutive defeats in 2012, against Timothy Bradley (controversial decision, Bradley vs Pacquiao) and Juan Manuel Marquez (fight of the year 2012 by The Ring magazine, Pacquiao vs Marquez 4), but then he has won three bouts beating Brandon Rios (=Pacquiao vs Rios), taking revenge on Timothy Bradley (=Pacquiao vs Bradley 2) and defeating Chris Algieri in his last fight (=Pacquiao vs Algieri). Mayweather vs Pacquiao is valid for the WBC, WBA and WBO World welterweight titles (the first two held by Floyd while the third by Manny).
If you want to know more about the two boxers we have analyzed some numbers, records and statistics about Floyd Mayweather Jr and Manny Pacquiao, and we have also compared Mayweather and Pacquiao through the CompuBox Stats with the five opponents they had in common: Oscar De La Hoya, Ricky Hatton, Juan Manuel Marquez, Shane Mosley and Miguel Cotto. Before rating this fight, here are some words said by Floyd Mayweather Jr to Showtime’s Brian Custer about ‘Pac-Man’ Pacquiao during the MayPac final press conference: “I can’t really judge him [Pacquiao] by how he looks, because he could come out and fight a total different way. We’ll see how everything plays out Saturday. […] Manny Pacquiao fights better going backwards. He’s a fighter who likes to move backwards and fight. He’s a guy who can’t fight as good going forward, but going back he can fight extremely good. […] You guys have to buy the pay-per-view. If you’re at home, buy pay-per-view right now. This is an event that you cannot miss. The biggest fight in boxing history. I’m in tip-top condition. I’m pretty sure he’s in tip-top shape also.” And this is what Manny Pacquiao said to HBO’s Kieran Mulvaney: “I feel excited and ready, relaxed. I have peace of mind for the fight. It’s one of the biggest fights. I can say that. It’s a historic fight. […] The Lord my God that I am serving, He will deliver him [Mayweather] into my hands on Saturday. […] I love to be an underdog. It’s motivated me more and it’s helped me a lot. It’s given me the encouragement, the focus. […] I cannot imagine that the Lord, He gives me these blessings. It’s amazing, if you have faith in the Lord, a relationship with the Lord, all things are possible.” Watch the video and rate the mega-fight!

Video: (Free embeddable video hosted on Youtube/Ok.ru and not uploaded by AllTheBestFights)