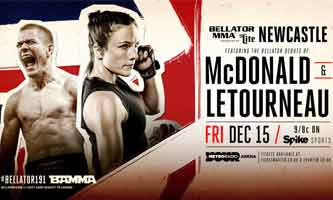 Review by AllTheBestFights.com: 2017-12-15, disappointing fight between Michael McDonald and Peter Ligier: it gets two stars.

The black belt in Brazilian jiu-jitsu Michael McDonald entered this fight with a professional mma record of 17-4-0 (88% finishing rate) but he is not ranked as he hasn’t fought since July 13, 2016 when he was defeated by John Lineker (=McDonald vs Lineker); before this bout he had beat Masanori Kanehara.
His opponent, Peter Ligier, has an official record of 8-1-1 (62% finishing rate) and he suffered his only loss when he faced Mike Wootten in 2014, since then he has collected four victories and one draw. McDonald vs Ligier is the main event of Bellator 191. Watch the video and rate this fight!