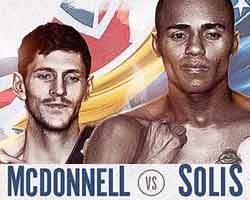 Review by AllTheBestFights.com: 2017-11-04, disappointing finish between Jamie McDonnell and Liborio Solis 2: it gets two stars.

The former Ibf and current Wba Bw champion Jamie McDonnell entered this fight with a professional record of 29-2-1 (13 knockouts) and he is ranked as the No.3 bantamweight in the world (currently the #1 in this division is Luis Nery). He suffered his last loss when he faced Lee Haskins in 2008, after this bout he has won 21 consecutive fights beating Fernando Vargas (=McDonnell vs Vargas) and Liborio Solis in 2016 (controversial decision, McDonnell vs Solis I).
His opponent, the former Wba super-Flw champion Liborio Solis, has a boxing record of 25-5-1 (11 knockouts) and he entered as the No.12 in the same weight class. Before losing to McDonnell he had beat Juan Carlos Vega and Freddy Beleno. McDonnell vs Solis 2 is valid for the WBA World bantamweight title; undercard of Dmitry Bivol vs Trent Broadhurst. Watch the video and rate this fight!

Result: Click here to show the fight’s result
Jamie McDonnell vs Liborio Solis (No decision due to McDonnell cut at 2:45, round 3)

Their previous fight: Jamie McDonnell vs Liborio Solis I

(Free embeddable video hosted on Youtube and not uploaded by AllTheBestFights)
https://www.youtube.com/watch?v=2aeS4zIZKBU