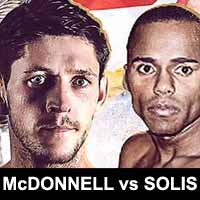 Review by AllTheBestFights.com: 2016-11-12, pretty good fight between Jamie McDonnell and Liborio Solis: it gets three stars.

The former Ibf and current Wba champion Jamie McDonnell entered this fight with a professional record of 28-2-1 (13 knockouts) and he is ranked as the No.3 bantamweight in the world. He suffered his last loss when he faced Lee Haskins in 2008, after this bout he has won 20 consecutive fights beating Tomoki Kameda twice in 2015 (Kameda vs McDonnell I and McDonnell vs Kameda II) and Fernando Vargas in 2016 (=McDonnell vs Vargas).
His opponent, the former Wba super-Flw champion Liborio Solis, has a boxing record of 25-4-1 (11 knockouts) and he entered as the No.18 in the same weight class. He has already fought three times in 2016 losing to #1 Shinsuke Yamanaka (=Yamanaka vs Solis) but then he has won over Juan Carlos Vega and Freddy Beleno. McDonnell vs Solis is valid for the WBA World bantamweight title; undercard of Luis Ortiz vs Malik Scott. Watch the video and rate this fight!

Their next fight: Jamie McDonnell vs Liborio Solis 2