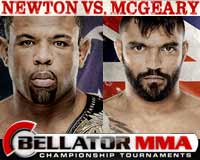 Review by AllTheBestFights.com: 2015-02-27, exciting first part of the fight thanks to an excellent work on the ground by both fighters but then the pace slows down a little if not this fight could get four stars: Emanuel Newton vs Liam McGeary gets three.

Emanuel Newton entered this fight with a professional mma record of 25-7-1 (52% finishing rate) and he is ranked as the No.8 light heavyweight in the world (currently the #1 in this division is Jon Jones); he suffered his last defeat in 2012 when he faced Attila Vegh (via split decision, Vegh vs Newton I), since then he has won seven consecutive bouts taking revenge on Vegh in 2014 and winning the undisputed Bellator Hw belt (=Vegh vs Newton II). After this fight he beat Joey Beltran (=Newton vs Beltran) and Linton Vassell (=Newton vs Vassell).
His opponent, the undefeated Liam McGeary, has a perfect record of 9-0-0 (100% finishing rate) and he entered as the No.19 in the same weight class; he fought three times last year winning the 2014 Bellator Summer Series light-Hw tournament beating Kelly Anundson in the final (=Anundson vs McGeary). Newton vs McGeary, main event of Bellator 134, is valid for the Bellator light heavyweight title (held by Newton). Watch the video and rate this fight!