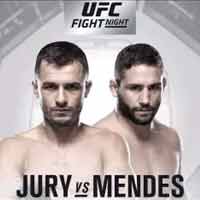 Review by AllTheBestFights.com: 2018-07-14, pretty good finish between Chad Mendes and Myles Jury but it is not enough to get three stars, it gets two (UFC Performance of the Night).

Chad Mendes entered this fight with a mma record of 17-4-0 (53% finishing rate) but he is not ranked as he hasn’t fought since December 11, 2015 when he was defeated by Frankie Edgar (Frankie Edgar vs Chad Mendes). Before this bout, in 2015, he had also lost to Conor McGregor in July (Mendes vs McGregor) and had beat Ricardo Lamas in April (Mendes vs Lamas).
His opponent, the black belt in Bjj Myles Jury, has an official record of 17-2-0 (76% finishing rate) and he entered as the No.13 featherweight in the world. He had also lost twice in 2015, with Donald Cerrone (Donald Cerrone vs Myles Jury) and Charles Oliveira (Charles Oliveira vs Myles Jury) but then he has beat Mike De La Torre and Rick Glenn. Mendes vs Jury is on the undercard of Junior dos Santos vs Blagoy Ivanov – UFC Fight Night 133. Watch the video and rate this fight!