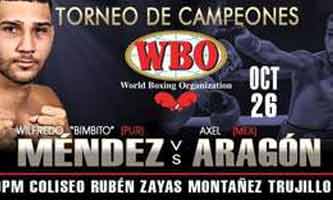 Review by AllTheBestFights.com: 2019-10-26, fight not particularly good between Wilfredo Mendez and Axel Aragon Vega 2: it gets two stars.

The Wbo champion Wilfredo Mendez entered this fight with a professional record of 14-1-0 (5 knockouts) and he is ranked as the No.3 minimumweight in the world. He lost to Leyman Benavides last year but then he has won five bouts defeating Armando Vazquez, Janiel Rivera and Victorio Saludar in 2019 (Vic Saludar vs Wilfredo Mendez).
His opponent, Axel Aragon Vega, has a boxing record of 13-2-1 (8 knockouts) and he entered as the No.50 in the same weight class. He suffered his last loss when he faced for the first time Wilfredo Mendez in 2018, after this bout he has beat Julio Cesar Morales, Edwin Reyes and Giovanni Noriega. Mendez vs Aragon is valid for the WBO World minimumweight title (Mendez’s first defense). Watch the video and rate this fight!