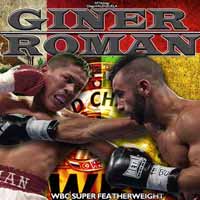 Review by AllTheBestFights.com: 2016-04-01, very nice and tough fight between Miguel Roman and Juli Giner: is very close to get four stars!

Miguel Roman entered this fight with a professional boxing record of 54-11-0 (41 KOs=76%) and he is ranked as the No.8 super featherweight in the world (currently the #1 in this division is Takashi Uchiyama). He suffered his last loss when he faced Dante Jardon in 2012, since then he has won 16 consecutive bouts.
His opponent, Juli Giner, has an official record of 18-1-1 (8 knockouts) and he entered as the No.18 in the same weight class. His only loss occurred in 2014, against Ruddy Encarnacion, after this bout he has won four fights beating Romain Jacob in his last one (4-stars-fight Jacob vs Giner). ‘Mickey’ Roman vs Giner, WBC super featherweight title eliminator, is the main event of the evening. Watch the video and rate this fight!