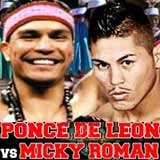 Review: 2014-06-07, fight not particularly good between Daniel Ponce De Leon and Miguel Roman: it gets two stars. Daniel Ponce De Leon entered this fight with a pro boxing record of 45-6-0 (35 KOs=77%) and he is ranked as the No.16 super featherweight in the world, he has won world titles in two different weight classes: the last title he won was the Wbc Fw belt beating Jhonny Gonzalez in 2012 (=Gonzalez vs Ponce De Leon) but he lost it at his first defense against Abner Mares (=Mares vs Ponce De Leon). After this bout he defeated Joksan Hernandez in 2013 (=Ponce De Leon vs Hernandez) but then he lost again in 2014 facing Juan Manuel Lopez (in a very exciting bout Lopez vs Ponce De Leon 2).
His opponent, Miguel Roman, has an official record of 45-11-0 (34 KOs=75%) and he entered as the No.14 lightweight, he had two world title shots in his professional career but he lost both fights: against Jonathan Victor Barros in 2011 and Antonio DeMarco in 2012; since then he has collected 8 wins and one loss. Ponce De Leon vs Roman is valid for the vacant WBC United States (USNBC) Silver super featherweight title. Watch the video and rate this fight!