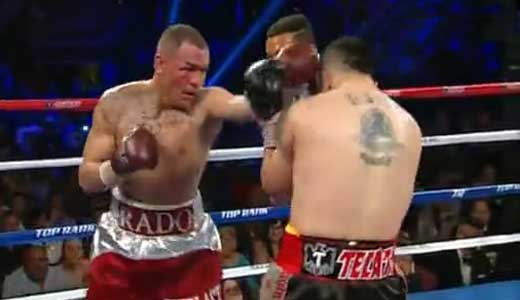 Review: 2013-03-30, another impressive performance and really tough fight between Brandon Rios and Mike Alvarado that fight toe-to-toe also in this rematch. Like in their first bout both boxers exchanged shot for shot in a sensational bout, probably not as exciting as the first one but still one of the best boxing fights of 2013, four stars! The undefeated Brandon Rios (31-0-1, 23 KOs) entered as the No.4 light welterweight in the world while Mike Alvarado (33-1-0, 23 KOs) entered as the No.9. In their first fight Rios defeated Alvarado by TKO and it was a war (Fight of the Year 2012 candidate); the rematch Rios vs Alvarado 2 is valid for the interim WBO light welterweight title. They also faced each other a third time on January 24, 2015 (=Alvarado vs Rios 3). Watch the video!