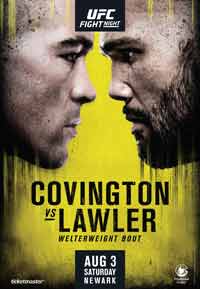 Review by AllTheBestFights.com: 2019-08-03, nice bout between Clay Guida and Jim Miller: it gets three stars.

The former Strikeforce Lw champion Clay Guida entered this fight with a professional record of 35-18-0 (57% finishing rate) and he is ranked as the No.43 lightweight in the world. He was defeated by Charles Oliveira in 2018 but he came back to win against BJ Penn in 2019 (Clay Guida vs BJ Penn).
His opponent, the black belt in Brazilian jiu-jitsu Jim Miller, has a mma record of 30-13-0 (67% finishing rate) and he entered as the No.36 in the same weight class. He also lost to Charles Oliveira last year (Charles Oliveira vs Jim Miller 2) but then he has won over Jason Gonzalez in 2019. Guida vs Miller is on the undercard of Colby Covington vs Robbie Lawler – UFC on ESPN 5. Watch the video and rate this fight!