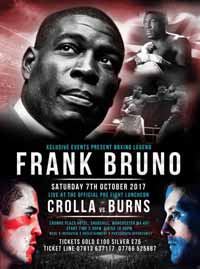 Review by AllTheBestFights.com: 2017-10-07, close fight but not so exciting: Sam Eggington vs Mohamed Mimoune gets two stars.

Sam Eggington entered this fight with a professional record of 21-3-0 (13 knockouts) and he is ranked as the No.9 welterweight in the world. He lost to Bradley Skeete last year (=Eggington vs Skeete) but then he has won four bouts beating Paul Malignaggi (=Eggington vs Malignaggi) and Ceferino Rodriguez in 2017 (=Eggington vs Rodriguez).
His opponent, Mohamed Mimoune, has a boxing record of 18-2-0 (2 knockouts) and he entered as the No.33 in the same weight class. He lost to Alexandre Lepelley in 2013 but since then he has collected seven victories defeating Jussi Koivula in his last one. Mohamed Mimoune vs Sam Eggington is valid for the EBU (European) welterweight title; undercard of Anthony Crolla vs Ricky Burns. Watch the video and rate this fight!