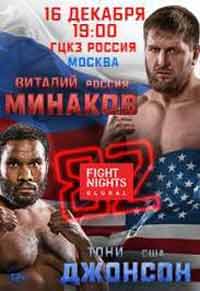 Review by AllTheBestFights.com: 2017-12-16, pretty good finish between Vitaly Minakov and Tony Johnson but it is not enough to get three stars: it gets two.

The undefeated black belt in judo, former Bellator and world combat sambo champion Vitaly Minakov entered this fight with a perfect mma record of 20-0-0 (90% finishing rate) and he is ranked as the No.18 heavyweight in the world. He has fought twice in 2017 beating DJ Linderman (=Minakov vs Linderman) and Antonio Bigfoot Silva (=Minakov vs Silva).
His opponent, Tony Johnson, has a record of 11-3-0 (55% ko/tko victory rate – he has never won via submission) and he entered as the No.26 in the same weight class. He lost to Cheick Kongo last year (=Kongo vs Johnson) but he came back to win in 2017 with Magomedbag Agaev. Minakov vs Johnson is the main event of Fight Nights Global 82 – FNG 82. Watch the video and rate this fight!