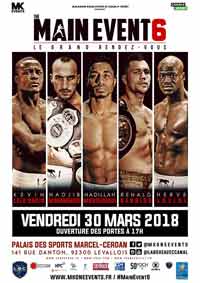 Review by AllTheBestFights.com: 2018-03-30, some good exchanges in the second part of the fight but it is not enough to get three stars: Hadillah Mohoumadi vs Nadjib Mohammedi gets two.

Hadillah Mohoumadi entered this fight with a professional boxing record of 23-4-1 (16 knockouts) and he is ranked as the No.18 super middleweight in the world. He lost to Callum Smith last year (Smith vs Mohoumadi) but then he has beat Ruslan Schelev, Mariano Hilario and Christopher Rebrasse (Hadillah Mohoumadi vs Christopher Rebrasse).
His opponent, Nadjib Mohammedi, has an official record of 39-5-0 (23 knockouts) and he entered as the No.22 in the same weight class. He suffered two consecutive losses between 2015 and 2016, against Sergey Kovalev (Sergey Kovalev vs Nadjib Mohammedi) and Oleksandr Gvozdyk, but then he has defeated Roman Shkarupa and Hakim Zoulikha. Mohoumadi vs Mohammedi is valid for the vacant WBA Continental super middleweight title. Watch the video and rate this fight!