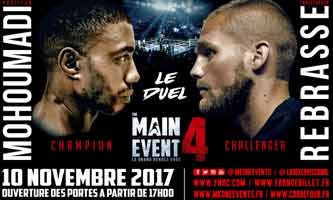 Hadillah Mohoumadi entered this fight with a boxing record of 22-4-1 (16 knockouts) and he is ranked as the No.18 super middleweight in the world. He lost to Callum Smith last year (=Smith vs Mohoumadi) but then he has beat Ruslan Schelev and Mariano Hilario.
His opponent, Christopher Rebrasse, has an official record of 25-5-3 (6 knockouts) and he entered as the No.51 in the same weight class. He fought three times last year defeating Matiouze Royer and Carlos Esteban but between these two bouts he lost to Rocky Fielding (via split decision, Fielding vs Rebrasse). Mohoumadi vs Rebrasse is valid for the EBU (European) super middleweight title. Watch the video and rate this fight!