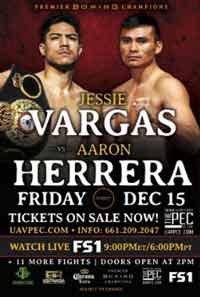 Review by AllTheBestFights.com: 2017-12-15, back and forth fight between John Molina Jr and Ivan Redkach: it is very close to get four stars!

John Molina Jr entered this fight with a professional boxing record of 29-7-0 (23 KOs=79%) but he is not ranked as he hasn’t fought since December 10, 2016 when he was defeated by Terence Crawford (=Crawford vs Molina). Before this bout he had won over Jorge Romero and Ruslan Provodnikov (=Provodnikov vs Molina).
His opponent, Ivan Redkach, has an official record of 20-3-1 (16 KOs=80%) and he entered as the No.53 lightweight but he won just one out of his last four fights, against Demond Brock in Janaury; after this bout he lost to Argenis Mendez. Molina vs Redkach is on the undercard of Jessie Vargas vs Aaron Herrera. Watch the video and rate this fight!