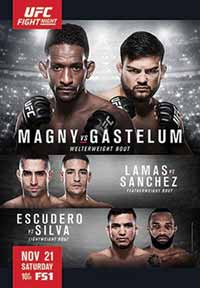 Review by AllTheBestFights.com: 2015-11-21, poor performance by both fighters: Erick Montano vs Enrique Marin gets two stars.

Erick Montano entered this fight with a pro record of 6-3-0 (100% finishing rate) while his opponent, Enrique Marin, has an official record of 8-2-0 (63% submission victory rate – he has never won by ko/tko). Montano vs Marin is the welterweight final of “The Ultimate Fighter: Latin America 2 Finale”; undercard of Neil Magny vs Kelvin Gastelum – UFC Fight Night 78. Watch the video and rate this fight!