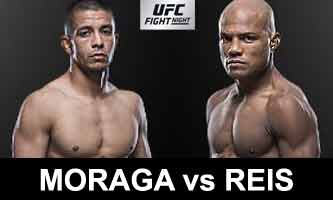 Review by AllTheBestFights.com: 2018-04-14, pretty good fight between John Moraga and Wilson Reis: it gets three stars.

John Moraga entered this fight with a pro record of 18-6-0 (61% finishing rate) and he is ranked as the No.8 flyweight in the world (currently the #1 in this division is Demetrious Johnson). He lost three consecutive bouts between 2015 and 2017, the last one with Sergio Pettis (Pettis vs Moraga), but then he has won over Ashkan Mokhtarian and Magomed Bibulatov (Magomed Bibulatov vs John Moraga).
His opponent, the black belt in Brazilian jiu-jitsu Wilson Reis, has an official mma record of 22-8-0 (45% submission victory rate – he has never won via ko/tko) and he entered as the No.11 in the same weight class. He fought three times last year beating Yuta Sasaki (Reis vs Sasaki) but then he lost to Demetrious Johnson (Johnson vs Reis) and Henry Cejudo (Henry Cejudo vs Wilson Reis). Moraga vs Reis is on the undercard of Dustin Poirier vs Justin Gaethje – UFC on Fox 29. Watch the video and rate this fight!

(Free embeddable video hosted on Streamja.com and not uploaded by AllTheBestFights)