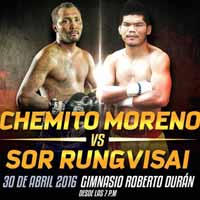 Review by AllTheBestFights.com: 2016-04-30, good fight between Anselmo Moreno and Suriyan Sor Rungvisai: it gets three stars.

The former Wba Bw champion Anselmo Moreno entered this fight with a pro boxing record of 35-4-1 (12 knockouts) and he is ranked as the No.7 bantamweight in the world but his last victory occurred in 2014 when he faced Javier Nicolas Chacon (=Moreno vs Chacon). After this bout he lost twice, against Juan Carlos Payano (=Moreno vs Payano) and #1 Shinsuke Yamanaka (=Yamanaka vs Moreno).
His opponent, the former Wbc super-Flw champion Suriyan Sor Rungvisai, has an official record of 46-6-1 (23 knockouts) and he entered as the No.20 in the same weight class. He also lost to Shinsuke Yamanaka (in 2014, Yamanaka vs Rungvisai), but since then he has won nine consecutive fights. ‘Chemito’ Moreno vs Rungvisai is valid for the vacant WBC Silver bantamweight title. Watch the video and rate this fight!