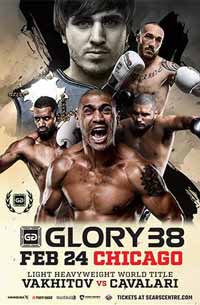 Review by AllTheBestFights.com: 2017-02-24, wild exchanges between Catalin Morosanu and Maurice Greene but it is not enough to get three stars: it gets two.

The former SuperKombat champion Catalin Morosanu entered this fight with a kickboxing record of 42-10-0 (25 knockouts) and he is ranked as the No.12 heavyweight in the world but he comes off three consecutive losses, against Daniel Sam (=Morosanu vs Sam), Zabit Samedov (=Samedov vs Morosanu) and Ondrej Hutnik.
His opponent, Maurice Greene, has an official record of 4-3-0 (2 knockouts) and he entered as the No.16 in the same weight class. He fought and lost twice in 2016: with Anderson Braddock Silva (=Silva vs Greene) and Chi Lewis Parry. Catalin Morosanu vs Maurice Greene is on the undercard of Artem Vakhitov vs Saulo Cavalari 3 – Glory 38. Watch the video and rate this fight!